It comes as no surprise that Christians have trouble identifying the Antichrist, as even the Bible says that there would be end-time religious deception, that false teachers will deceive many people as the end of the age approaches:

As the Bible warns, religious deception is widespread. When a person is deceived he is misled by false appearance or statement. Such a person thinks things are one way when in reality they are a different way. The end days are filled with deception from evil people:

“Evil men and impostors will go from bad to worse, deceiving and being deceived.” [2 Tim 3:13]

On Amazon in the description of the book one will read:

“Testimony of Antichrist compares and contrasts Islam, Judaism, and Christianity by way of their foundational literature. This book is a scholastic work that provides the basic similarities and differences between and among these three major world religions. The importance of this work is in: (1) identifying the sector of origin for the final Antichrist; (2) explaining the correct interpretation for “666;” and (3) distinguishing the differences between the beast of Chapter Thirteen and the beast of Chapter Seventeen in the Book of Revelation. This well-written work is intended for use as a practical handbook for understanding as well as responding to major end-time global events that relate to Islam.” 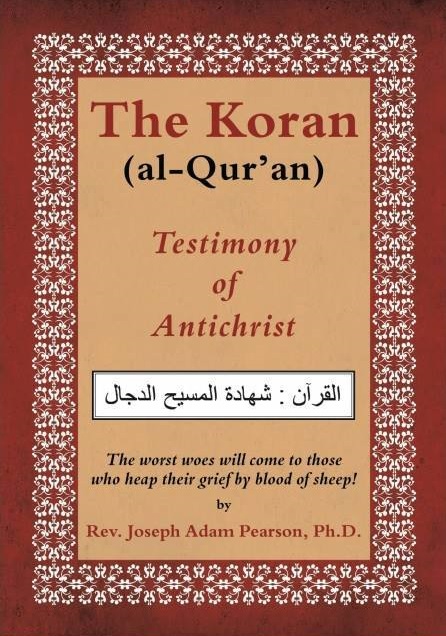 Firstly, the correct translation of this verse is:

The Qur’an is the literal word of Allah, the final revelation for mankind, which Allah revealed to Prophet Muhammad pbuh, through the Angel Gabriel, confirming what little truth remains in parts of previous scriptures and refuting and correcting fabrications and additions which have crept into current day versions of such scriptures.

Many of you are already familiar with Islam’s claim that the present day Bible is corrupt. What Muslims believe is corrupt is seldom talked about in the media. I wrote about some of the corruptions in these articles, here, here, and here.

After reading those articles, you will learn that Allah accused the Children of Israel (i.e., the Israelites ) of rewriting the Torah; and that includes writing falsehood against Ishmail pbuh (i.e., Genesis 16:12).

The Qur’an has corrected the falsehood about Ishmael pbuh:

“Also mention in the Book (the story of) Ishmael: He was (strictly) true to whatever he promised and he was an Apostle (and) a Prophet. He used to enjoin on his people prayer and charity and he was most acceptable in the sight of his Lord.” [Qur’an, 19:54-55]

After the death of Solomon, they corrupted the Torah by rewriting it several times in several different versions. The Harvard-trained American Biblical scholar, Richard Friedman, has conclusively demonstrated this in his very important work entitled (non-affiliate link): Who Wrote the Bible?

The Israelites also excluded Ishmael pbuh from Allah’s covenant so that they could claim exclusive title to being the ‘chosen people’ of Allah. You can read more about the covenant here. Deliberate effort appears to have been made in the Bible to exclude Ishmael pbuh, but he is still found to be addressed by God as seed of Abraham:

“And God said unto Abraham, Let it not be grievous in thy sight because of the lad, and because of thy bondwoman; in all that Sarah hath said unto thee, hearken unto her voice; for in Isaac shall thy seed be called. And also of the son of the bondwoman will I make a nation, because he is thy seed.” [Genesis:21:12-13].

The author of this book then went on to proclaim that we Muslims are being deceived by Satan:

The Bible teaches that Satan is the father of lies and deception. The Qur’an teaches the same message, so let’s do a real comparison of the Bible and Qur’an:

“And the devil that deceived them was cast into the lake of fire and brimstone, where the beast and the false prophet are, and shall be tormented day and night for ever and ever.” [Revelation, 20:10]

“O mankind, fear your Lord and fear a Day when no father will avail his son, nor will a son avail his father at all. Indeed, the promise of Allah is truth, so let not the worldly life delude you and be not deceived about Allah by the Deceiver (i.e., Satan).” [Qur’an, 31:33]

Here we see that Satan is the deceiver, who deceives mankind from the truth, according to the Bible and Qur’an. The following verse from the Qur’an also clearly proves that Allah is not Satan (Lucifer):

“Did I not enjoin upon you, O children of Adam, that you not worship Satan – [for] indeed, he is to you a clear enemy – And that you worship [only] Me? This is a straight path. And he had already led astray from among you much of creation, so did you not use reason?” [Qur’an, 36:60-62]

Since the Qur’an reveals that it is the final revelation for mankind and warns that the previous scriptures were corrupted, does that mean the Qur’an admits Allah is Satan? No. Does the Bible? No, that belief solely comes from Christian missionaries who deliberately distort religious scripture to deceive ignorant Christians about Islam.

Satan’s arrogance – reinforced by his false logic, and jealousy – prevented him from obeying Allah’s command. He made misleading man his primary goal. Allah told us about that in the Qur’an:

[Satan] said, “Because You have put me in error, I will surely sit in wait for them on Your straight path. Then I will come to them from before them and from behind them and on their right and on their left, and You will not find most of them grateful [to You].” [Qur’an, 7:16:17]

Allah warned us in the Qur’an:

“O children of Adam (i.e., mankind), let not Satan tempt you as he removed your parents from Paradise, stripping them of their clothing to show them their private parts. Indeed, he sees you, he and his tribe, from where you do not see them. Indeed, We have made the devils allies to those who do not believe.” [Qur’an, 7:27]

So, Allah has made it clear to mankind that Satan is their enemy:

“Indeed, Satan is an enemy to you, so take  him as an enemy. He only invites his followers that they may become the dwellers of the blazing Fire (i.e., he wants to drag as many people as possible to hell with him, by misleading them)” [Qur’an, 35:6]

“And if an evil whisper from Satan tries to turn you away (O Muhammad) (from doing good), then seek refuge in Allah. Verily, He is the All Hearer, the All Knower” [Qur’an, 41:36]

The conclusion is that the Bible and Qur’an does not admit Allah is Satan.

There is no conclusive evidence to suggest that it was Satan who appeared to Muhammad pbuh as the angel of light. Again, it is only Christian missionaries and the imagination of non-Muslims with their wishful thinking. Muhammad pbuh was not Christian, but the Qur’an indicates that all human beings possess the divine soul or spirit within them, as Allah can bless any of His true servants by strengthening him with a soul, or spirit, from Him, which you can learn more about, here.

The author then explained Prophet Muhammad pbuh was psychologically unstable. Is this true? No, but the majority of non-Muslims believe it.

Let’s now compare Christianity and Islam’s view on the Antichrist.

According to both Christianity and Islam, The Antichrist will ultimately be a powerful political and military world leader of the final One World Government, and that state’s capital will be Jerusalem. This Christian website gave a very accurate and detailed description of the end time Antichrist:

Islamic sources also give the exact same view of the Antichrist, so why did the author fail to mention Judaism as an Antichrist religion? The Jews rejected Jesus pbuh as their messiah, and still reject him to this day, as they are waiting for their promised Messiah. But that will be the false messiah, or the Antichrist, as their promised messiah already came to them.

Disbelieving that God has a son, or that Jesus pbuh was never crucified, does not make Islam Antichrist, since the Qur’an claims to be the final revelation revealed by God, warning mankind that God does not have any partner, a son, nor was Jesus pbuh crucified. A more logical response to such a claim would be to say this makes Islam either a true or false religion, but not Antichrist, as Muslims have to believe in all the prophets sent by God, including Jesus pbuh. You can read about the Jewish rejection of Jesus pbuh and the crucifixion, here.

The author of this book needs to be questioned on his scholarly work and credentials. There’s many evidences throughout his work of his deliberate intention to lead Christians astray. Anyone with an open mind can observe the pack of lies put fourth in this publication, “The Koran: Testimony of Antichrist”.

As my readers go back to my post on the Jews having rejected Jesus pbuh as the messiah, any responsible reader should question the authors intentions by having distorted not only the Qur’an, but the book of Revelation as well.

Is Islam the chosen religion of Satan?

Coming to understand that “666” (i.e., code) is not a cipher for prophet Muhammad.

Prophet Muhammad pbuh prophesied three stages (i.e., 666) of a master-plan through which the Antichrist would eventually accomplish his mission of impersonating the true Messiah and ruling the world from an impostor State of Israel in the Holy Land.

The Bible described the very same three-stage process (i.e., 666) that would culminate with a new international monetary system of electronic money [Revelation, 13:16-18] and with the Antichrist ruling the world from Jerusalem.

There are many Christians who cannot see the mark of the beast in the present bogus monetary system of paper, plastic and electronic or digital money.

The number ‘six hundred’ in relation to the Antichrist refers to the first stage of the plan that lasted for a long time and witnessed the emergence of the first ruling state Pax Britanica. The number ‘three score’ refers to the present second stage that lasts for a shorter period of time and Pax Americana. The number ‘six’ refers to the third and last stage of the master plan with which the Antichrist finally completes his mission and emerges in human form to rule the world from Jerusalem and from an impostor State of Israel with Pax Judaica.

Satan’s religion of choice is not Islam, as he does not care what religion you are as long as you are not Muslim. If you are not Muslim, then you are following Satan and the Antichrist. This is why there is an abundance of propaganda against Islam in the hopes that Muslims will leave Islam and follow him. This is the Islamic belief, and I am sure this is what Christians believe to be true about Christianity as well. If you are not Christian, then you are being mislead by Satan and the Antichrist.

The author of the book will show conclusively that only Islam can fill the role of the Antichrist, but when we compare true Islam, i.e., not deliberately distorted by false Christian preachers, with Christianity side by side, we see there is no contradiction about the Antichrist.

I would love to hear your thoughts!

This site uses Akismet to reduce spam. Learn how your comment data is processed.