Is This the End of France? Why Pamela Geller is Fake News

The following article by Geller Report is very misleading, and was carefully phrased for its readers to assume the asylum applicants are only Muslim, since there are other fake news sites reporting that Europe has not accepted a single Christian refugee, which is false. You can also read more about her fake news here, as well as her myth of 1,500 no-go zones for non-Muslims in France.

This was originally published by another propaganda news site, Breibart, and deliberately taken out of context to continue stirring up feelings of fear (i.e., the kalergi plan) and intense hatred towards the Muslim community:

Pamela Geller decided to dedicate her life creating and sharing fake news or exaggerated half-truths that have been completely taken out of context to demonise Muslims, particulary French Muslims. Most fake news about France is coming from the United States, which is no surprise, since the U.S. is no stranger to interfering in other countries affairs.

It is important to focus mostly on the parts of the interview in bold.

The statement by Didier Leschi is false, and other remarks have been taken out of context to give a misleading report on the situation: 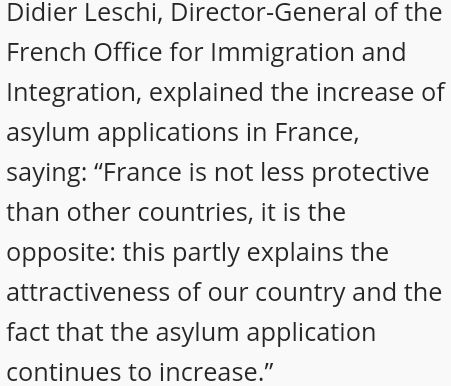 In the official interview, Leschi explained the sudden increase of asylum applicants from safe countries:

Interviewer: Emmanuel Macron stressed the situation of Georgians and Albanians, who come from countries considered “safe” by France. What do they represent in the asylum?

Leschi: The Georgian asylum application has increased by 61% since the beginning of the year, and that of Albanians by 23%. This is because nationals of these states do not need a visa for France. Since January, nearly 12,000 Georgians and Albanians have applied for asylum (out of approximately 120,000 applicants). More than 11,000 are supported by the French Office for Immigration and Integration in reception centers.

He explained the increase of asylum applications in France and what causes their attractiveness to the country:

Leschi: “Georgians and Albanians are attracted by social, health and even monetarized care with the asylum-seeker allowance (€ 6.80 per day for a single person) which seems better than elsewhere. Since early 2019, the number of Georgians who seek a residence permit “sick abroad” has also increased by 88%.”

Interviewer: “The asylum application is therefore up in France (+ 15%) but down in other European countries. Why?

Interviewer: “Almost one third of asylum seekers arriving in France have already been rejected in another European Union country. Is France a country of second choice?”

Leschi: “…The migrants decided that it was better to go to a country where insertion seemed easy because of the labor market. As a result, the middle classes, particularly well-trained from Syria and elsewhere, headed for Germany or the Nordic countries. But, contrary to what is said, Germany did not host 1.6 million refugees. She rejected nearly 700,000. Some of the rejected arrive in France. France is thus the “rebound country” of those who have been rejected.”

In France, a rather significant increase in asylum demand, + 20%, continues in 2019, and this request for asylum comes largely for the most part from people from safe countries of origin.

Ofpra, the French Office for the Protection of Refugees and Stateless Persons, are responsible for deciding on the asylum and statelessness applications submitted to it them. They have drawn up a list, last updated in 2015, which includes 16 “safe” countries with regard to the guarantees of protection that the authorities of these countries offer against persecution and ill-treatment as well as the sanctions that they provide in case of proven violation of individual rights.

They need to examine the files of the applicants from all countries whether it comes from a country considered safe or not as it is one of the principles of the Geneva Convention of 1951 relating to the status of refugees, of which France is a signatory. According to Article 3 of this Convention: “The Contracting States shall apply the provisions of this Convention to refugees without discrimination as to race, religion or country of origin.” Every citizen has the right to make an asylum claim. Applications will continue to be evaluated on an individual, case-by-case basis.

For the government, significant demand from safe countries is not normal. As you can see from the interview, Leschi is specifically talking about the increase of Albanian and Georgian and then asylum applicants from other safe countries.

Leschi: “We are working with the Georgian authorities to counter propaganda channels that sell medical dream and make believe that in France there are miracle treatments”.

In May, Interior Minister Christophe Castaner had estimated that the numerous requests from Georgia constituted an “anomaly” that not only ” deprives the country of life ” but also ” generates an incapacity of France to properly welcome those which must be protected “, while camps are forming in French cities where Afghans or Eritreans are struggling to access the asylum system. Mr Castaner therefore unveiled measures concerning this country in May but also concerning Albania in March.

So what is the real asylum situation in France?

” In France, where there is a 20% increase in the asylum application for the second consecutive year, it is the Albanians and Georgians who draw the demand, behind the Afghans,” said Jean-Christophe Dumont, chief International Migration Division.

This site uses Akismet to reduce spam. Learn how your comment data is processed.